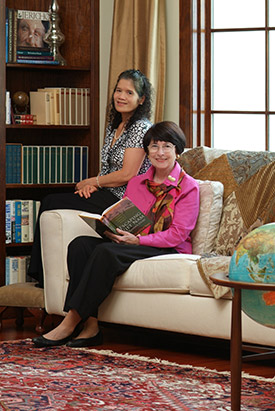 Harriet Hill was raised in Florence, Alabama, and graduated from Salem College in Winston-Salem, North Carolina, with a Bachelor of Music in voice. After college, she moved to Atlanta where she met and married her husband, Jim. They later settled in Raleigh, NC.

While raising their three sons, she was an active volunteer in community organizations and in her church. As chairwoman of a stained glass window committee at St. Michael’s Episcopal Church, she spent five years researching liturgical symbolism that became uniquely designed and fabricated into 30 stained glass windows. Her first small book was one that instructed children about the significance of the windows’ imagery.

When their youngest son was 15-years-old, he had an unimaginable accident and survived only a week. In 1995, Harriet wrote of the horror, her struggles and her faith in her first published book, For the Love of Robert… A Mother’s Struggle with the Illusion of Separation. The book is in its second printing.

In 1990, Harriet Hill met H’Yoanh Buonya, her husband and their two young daughters when St. Michael’s Church in Raleigh agreed to build a Habitat for Humanity house with their family. A strong bond took place between the two women, and their mutual respect grew into a long-lasting friendship.

While they struggled through English tutoring, Harriet encouraged H’Yoanh to tell her story, and promoted the idea of someday writing a book. It seemed an impossible dream, but 23 years later, H’Yoanh’s story is on the printed page, and Harriet has had the privilege of being a part of sharing a most remarkable account of survival and faith.

H’Yoanh Ksor Buonya was born in Ceo Reo City, Viet Nam into a Montagnard, Jarai tribe. She was raised from a baby by an aunt and uncle, after her mother suddenly passed away. Her father died in combat in the military service of South Viet Nam.

At about the age of four, H’Yoanh was sent to Thanh Gia Catholic orphanage/school where one of the nuns, Sister Helen, inspired her with the values and goals that guide her to this day. During some weekends, she visited her family and worked in their fields and garden. But as a teenager, she yearned for more education and managed to attend schools away from her village.

In 1975, at age 16, she fled persecution by the Viet Cong communists and escaped into the jungles of the Central Highlands, Cambodia and Thailand, where she spent 11 years on the move with other Montagnards who struggled to stay alive.

While in the resistance camp of Dangrek, Thailand, she met and married her husband, Y-Jim, and during their journey farther into Thailand toward safety, they had their first child. After several moves and camps, they were assigned to one of the first groups of Montagnards brought to the United States in 1986 by Lutheran Family Services, Vietnam veterans and the US government. Those groups were settled in the cities of Raleigh, Greensboro and Charlotte, North Carolina.

H’Yoanh and her husband immediately began to learn English, took whatever work they could — from domestic service to production-lines — and began the process toward citizenship. Y-Jim worked four jobs while going to a technical college and earned an associate engineering degree. She balanced jobs with raising children, pursuing more education for herself and becoming an interpreter for other Montagnards in the Raleigh area.

They qualified for a Habitat for Humanity house, where they still live. Their family grew to five children. The oldest, a daughter, is a graduate of Elon University School of Law, and the other four children have various college degrees.

Being active in her Catholic Church has always been a priority for H’Yoanh. In addition, she has begun classes to secure her high school degree from Vietnam, with plans toward a college degree.

© Harriet Hill | Site by A New Machine
Back to Top